Have you ever seen anything cuter?? 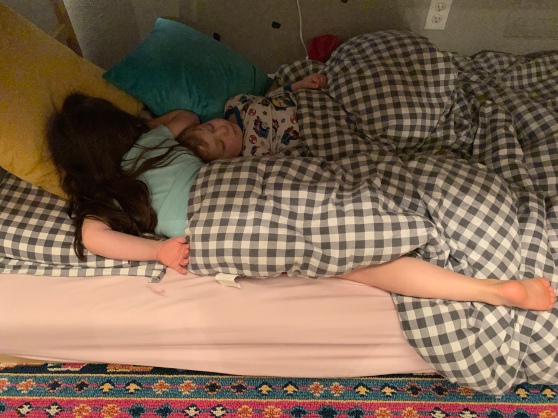 During the second weekend of September, we went on QUITE the glamping trip with friends. We packed up the kiddos and headed off on a 3-hour journey to a Jellystone Campground… but not for your average camping… because let’s be real, life is just a little easier with running water and a kitchen. And with 4 children under the age of 5, we were looking for easy & relaxing.

SO, we rented the grand Villa for the weekend and enjoyed all of the luxuries Yogi Bear & the Jellystone Park had to offer us, which was a bit less than normal, as we were a week or so past season.

The park-ground was a bit of a ghost town, but that made it all the better!

Our villa was a two-bedroom with a loft, full kitchen and a bathroom. See, glamping! AKA glamorous camping. To add to the hilarity, we actually had the kiddos stay in the bedrooms (our kids in one, our friends’ kids in the other) and the adults stayed upstairs in the loft, which featured 4 twin beds. This setup made our late-night camp fires easier.

The Jellystone theme for the weekend was “A weekend at the farm” and was filled with tons of activities from candy bar “horse races” to finding a needle in a haystack. We had such a great time!

I loved the early mornings strolling around the quiet campgrounds. It was one for the books!

Needle in a haystack:

Playing with Friends Near the Villa:

Somehow summer FLEW by and it’s suddenly what Wisconsin is calling, “Finter”… aka what should be fall, but is being overtaken by Winter. School has started and my sweet Char is deep into Kindergarten. Full-day school and the beginning of her true “childhood years.” I’m not crying, you’re crying!

Before too much time has flown by and I fall WAY too far behind, I figured I’d post everything from the first day of school until now. SO, prepare yourself for an overload of photos from my sweet crew…

I don’t know how it’s possible, but despite the crazy, every moment that passes seems to get better and better. The kids are amazing. This summer we switched them into the same room, which has been wonderful and psychotic. They love the shit out of each other, which tends to get in the way of sleeping. Their routine is essentially to stay up late playing one night and then crash hard and early the next night… and repeat. We definitely have to figure out a way to get them more sleep, but I will say, I don’t hate hearing them giggle all night.

Halloween was a blast! Charlotte refused all of my ideas for family costumes with her BIG DREAMS of being a “beautiful princess who is beautiful and fancy with real magic circles on her dress”… I couldn’t seem to find real magic circles on Amazon, but we did the best we could! And, Mr. Henry went from requesting an “Owlette” costume (from PJ Mask) – because she’s so beautiful – to Blippy. In the end, he was transformed into even more of a cartoon character and should never wear anything besides that damn costume ever again.

As a side, it should be noted that we FINALLY let the kids pick some candy to eat from their trick or treat haul… this morning… first time. Let’s just say that Mark and I got busted for eating so much of it. Somehow C seemed to remember specific pieces of candy she had received… oops. Noted for next year.

After the most perfect day for trick or treating (and a weekend FULL of birthday parties for C), Finter kicked in and we had our first snowfall. Literally days later, on Halloween. It was bananas… and magical! The kids loved it!

For Halloween, we made a SPOOKY feast and had the best night!

& Here are some pics from more fun since the beginning of the school year!

Charlotte’s Farm Field Trip (& Mommy’s first time as a field trip chaperone… note: riding a bus at 34 is not amazing):

Family Photos – Behind the Scenes:

These two are everything. I love the way they love each other. A friendship for the books 👫 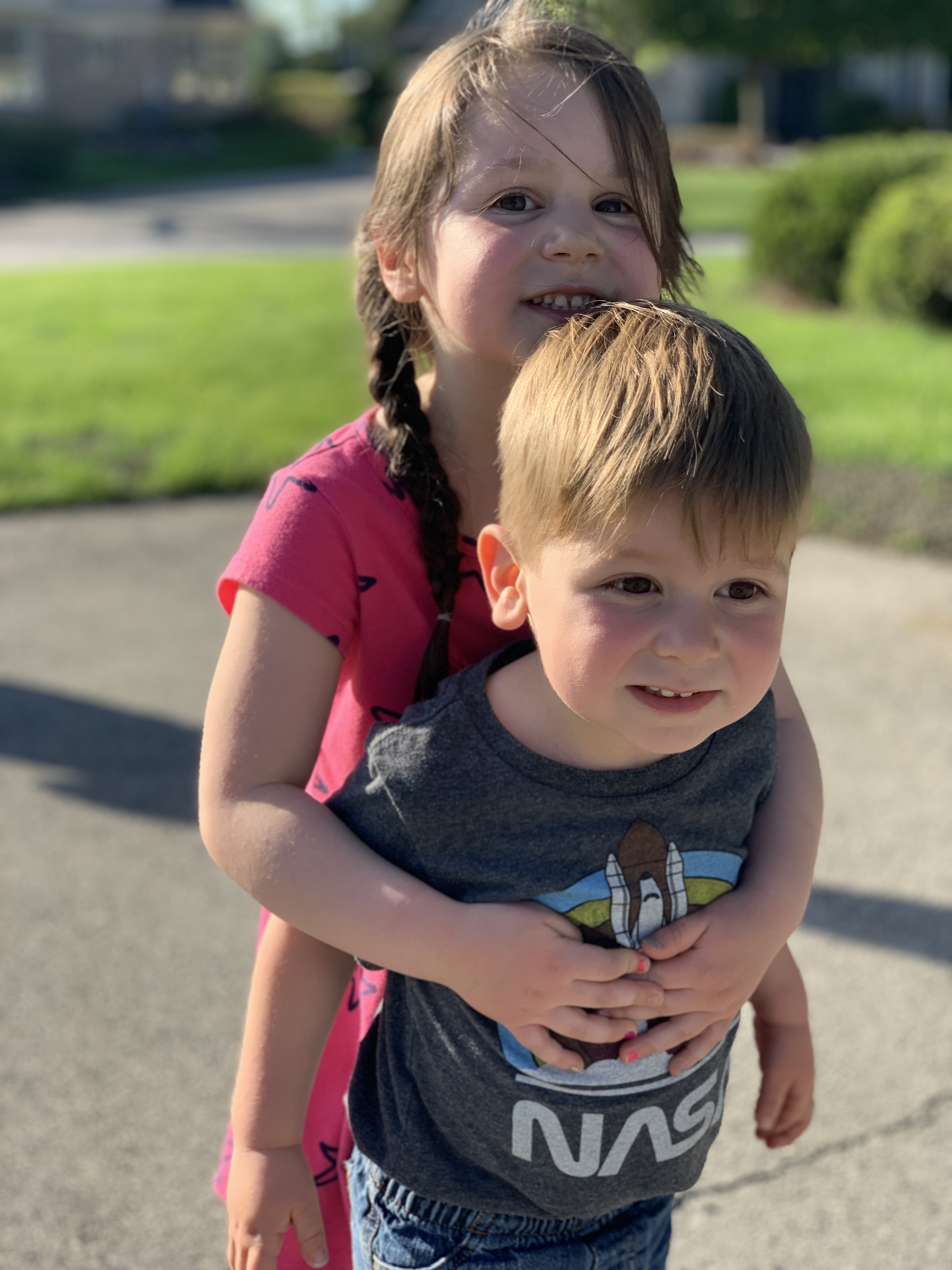 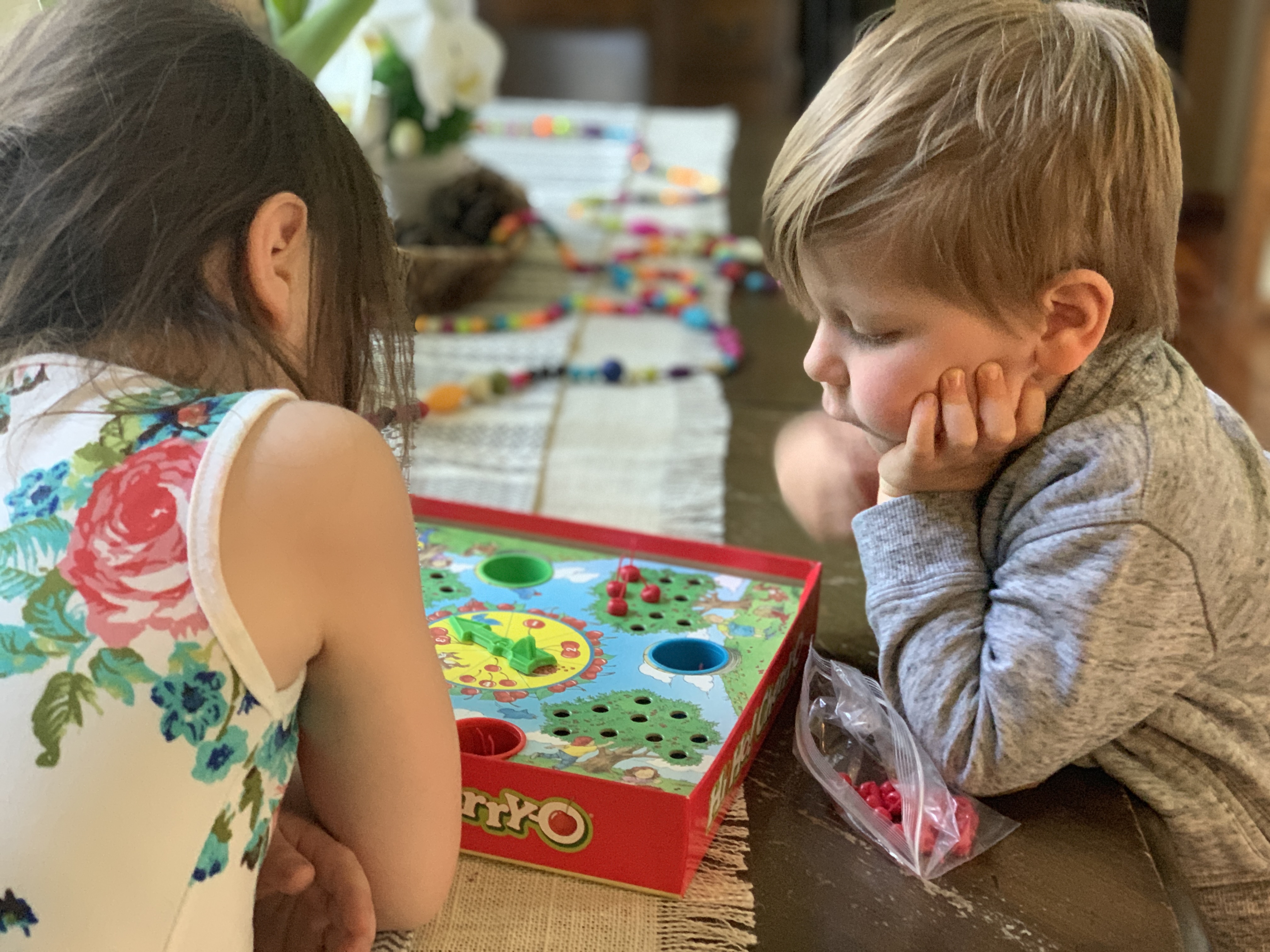 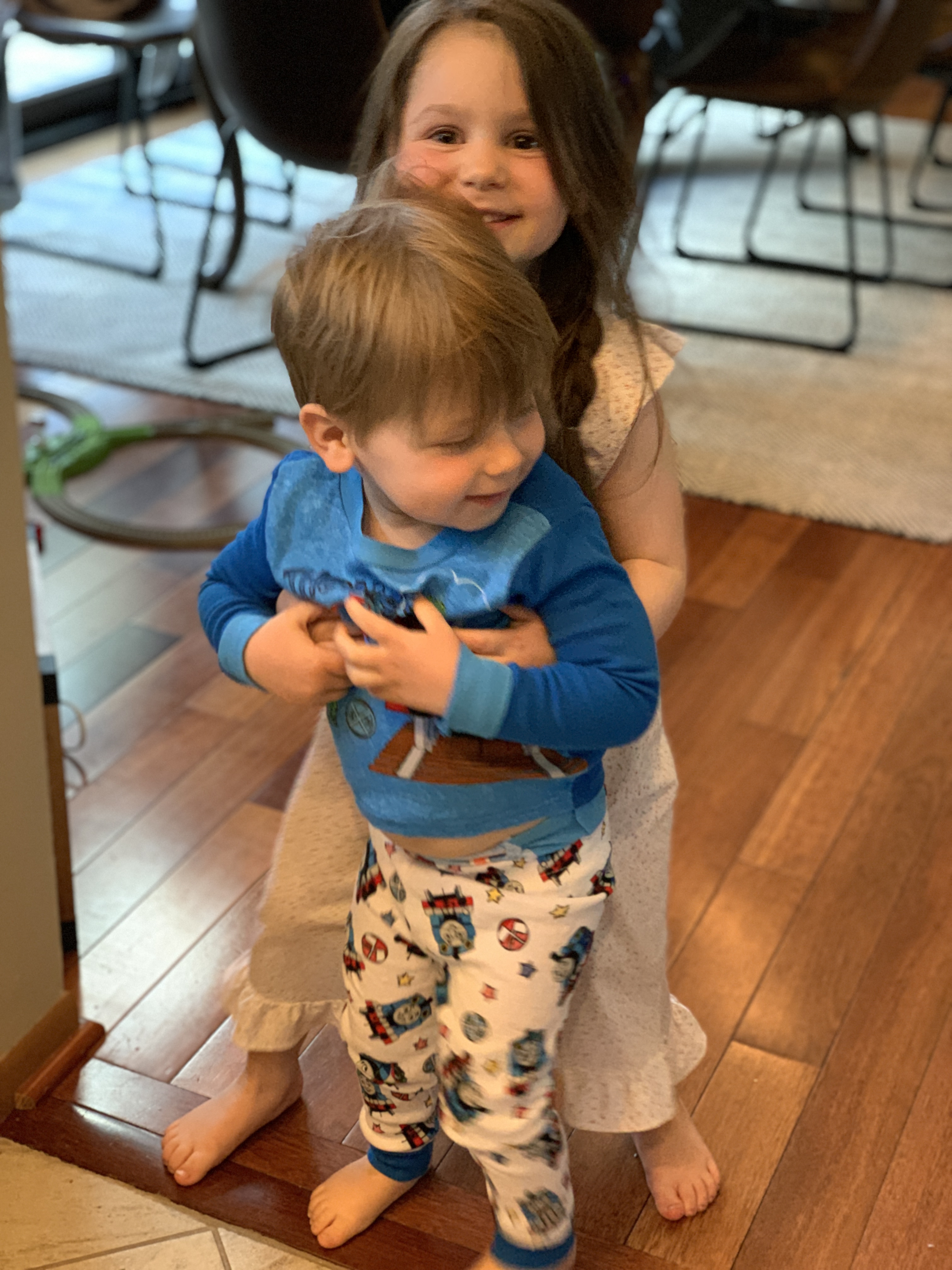 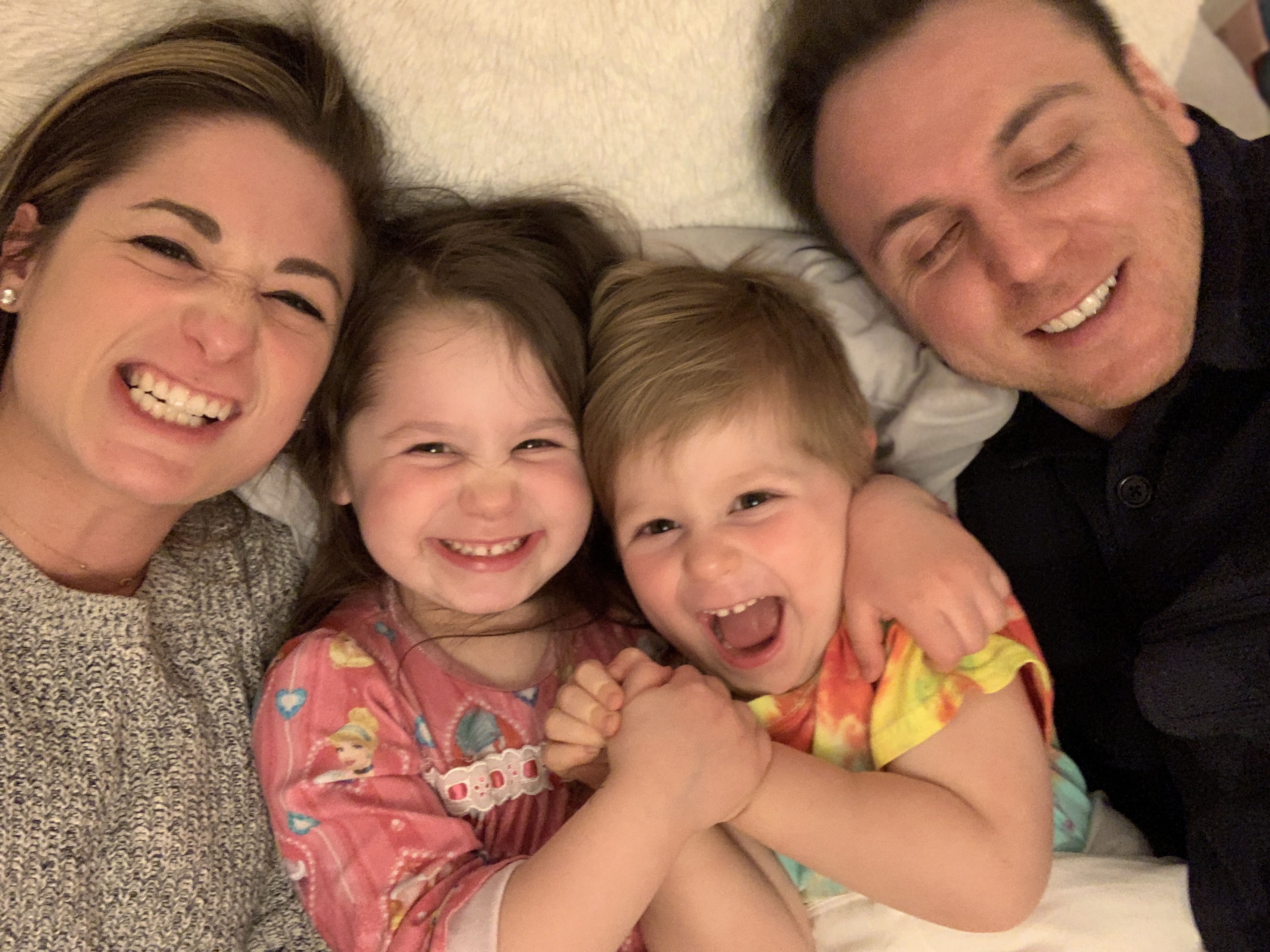 While Charlotte is still in her 4K school program with the public school, the kids’ Montessori school recently had their last day. Can you believe how much they’ve changed???

It should be noted that both of my children want to be parents when they grow up. Little sweeties. Specifically, Henry would like to be a “dad like my other dad”… aka like Mark. haha And my sweetie Charlotte’s favorite thing is her whole family.

And here are some other cutie pie pics from the morning…

This past weekend, we had quite the living room baseball sesh. Soon both kids will be hitting the ball too hard for indoor play, but for now, these are the moments I absolutely adore.

Henry is officially three years and three days old. How has this happened? My baby’s feet are slimming down and starting to smell, his hands have lost their pudge, he is pretty much a grown adult. The gist? Time is flying and my baby is getting old.

Despite my internal tears being shed for the manner in which time is just flying by, this birthday has been so exciting. For about a month before Henry’s birthday, he started really getting excited. Asking at bedtime, “when I wake up from this nap, will it be my birthday?” and waking every morning asking, “is today my birthday??” The anticipation was really building.

In pure Melissa/Mark fashion, the night before Henry’s birthday consisted of a ridiculous amount of toy building and house decorating. We ran around like crazy people making sure everything was perfectly placed to give Henry a great birthday surprise when he woke up.

I set my alarm for 615am in hopes of waking up before Henry so I could see his reaction. However, the bugger beat me. At around 6, I heard his tiny voice, “Charlotte, look!!!!!”

I popped up and ran to catch Henry discovering each Thomas the Train decoration, piece by piece. Then the balloons and his GIANT, tablecloth-covered gift.

He was overwhelmed with excitement!

The kiddos played for the next couple hours while I got everything ready for our birthday breakfast. Our favorite little friends (neighbors) were coming over to enjoy a celebratory breakfast and some playtime.

After breakfast, our friends went home and we hopped in the car to go downtown to ride the new streetcar (which we called the train for excitement purposes). We took the “train” to the public market and ate a yummy lunch and ice cream outside, then took the streetcar back to our car. It was a great little adventure!

Then, nap time and a movie night picnic back at the house. We set up the projector and watched about an hour of cars before the tiny tots got bored and we moved on to playing with Henry’s new toys.

All in all, the celebration was great! We had such a happy day. These are the days I want to bottle up and keep perfectly preserved forever.

And, in terms of a Henry update, here are the facts…

On January 29th, I went to my primary care doctor for a lump on my abdomen. I had been noticing the lump for at least a month – typically during my workouts – but hadn’t really thought much of it. Then, during one of the 4 snow days we had in January, I decided to google lump on abdomen. The results led me to go see my doc the next day.

At that first visit, my doc used the phrase “tumor on your abdominal wall” about 3 times. I quickly scheduled an ultrasound and continued googling. As I waited for the ultrasound appointment, I became a bit of a recluse. It’s interesting because I’m typically a wide open book, but there was something about this fear that was different than anything I had experienced in my life thus far. I didn’t want to talk about it… it was too much.

Mark came to the ultrasound appointment with me. We were both so nervous. The last time I had been there was to see our sweet Henry in the womb. Definitely a different experience this time. The ultrasound tech – who was the same tech we had during my pregnancies – eventually ended up telling me to relax. “It looks like a hematoma from a sports injury. Definitely not something to be overly concerned about.” Okay… deep breath.

I then went to the surgeon my primary care doc recommended. He confirmed that it’s likely a hematoma. I was told to watch and wait for 6 weeks. Despite not having any real sports injury, I do work out at Orangetheory 4-6 times per week and they thought that my fruit-pit of a lump was likely from a torn muscle. A hematoma should go down in size, so we’d wait and reevaluate.

After 2 or so weeks, I started to feel what seemed like another lump. I called and they told me to keep watching. By the next week, there was definitely another. Of course, I couldn’t get back into my doc for another week or two, but when I did, we began a new little journey.

There was in fact another and it was time to retire the hematoma theory and move on to the “zebra”… the rarity. My doc scheduled me for a CT scan. I was back to panicking. I spoke to a friend’s dad who suggested it might be a Schwanoma. My doctor had listed everything from a sarcoma to breast cancer. Nothing was off limits.

There was lots of waiting only to find out that the CT scan was inconclusive. Next step, needle biopsy. I’m going to be honest, I was not overly concerned about pain from this and was VERY unpleasantly surprised during and after. I assumed it was like a shot. I was wrong.

I had driven myself to the doc and met my husband there. I called him on my way back home and all of a sudden, the pain and overwhelming emotion hit. I had to go. All I could do was just drive. I had to get home, crawl into bed and just be in darkness.

My doctor had told me that the needle biopsy had something like a 92% diagnosis rate. No surprise that after waiting the weekend for results, I was told that the results came back inconclusive.

The next step was surgery. For someone who lives in the black and white, I was really stuck in grey. So much unknown. So many people telling me I would be okay, that it was probably nothing, that I shouldn’t worry… but me knowing that nobody knew how it was actually going to end up.

The surgery was hard for me to swallow. My surgeon would go in… he would perform a biopsy and send it to the lab while I was under. Depending on the results, he would either leave the tumor in, remove the tumor only, or do a wide resection, removing the tumor and healthy muscle and tissue. I would get to find out upon waking up.

The whole thing was so surreal. I got to the hospital with Mark on March 21, 2019, first thing in the morning. Mark insisted on taking pictures and of course, got a good laugh out of me…

Then, my parents came. In pure dad-form, he was cracking jokes, making me laugh, distract